Alcohol is an interesting subject. We use it to bring confidence, wind down from the day, and connect with others. If you don’t drink or you don’t drink heavily, people sometimes push it on you. Not cool, but it happens.

The short answer to this question is 7 calories per gram of alcohol found in a drink. So those light beers that are 2.6 carbs and that’s it? Yeah, the other 90 calories come from alcohol. This is problematic because the FDA doesn’t require a nutrition facts label on alcohol (but does on all other beverages), which, quite frankly, opens up a whole world of questions and uncertainty, especially if you’re trying to watch the amount of calories you’re taking in or tracking your macros.

But it’s the effect of those calories on your body that I’m really concerned about. I’m concerned about them because people aren’t factoring them into their diets and screwing up their progress. It’s also the reason that a lot of college freshman end up gaining a lot of weight (in addition to a more sedentary lifestyle and changing metabolism) and athletes aren’t making the gains they should be.

My recommendation: drink minimally or not at all. I personally only drink on special occasions or if I’m with friends (and even then I’m doing my best to limit myself to a 2 drink maximum per Patti Stanger’s advice). This will help you factor that into your diet better and not totally annihilate any muscle you’ve gained. Now, some people will naturally retain muscle (mesomorphs, I’m looking at you), but that’s not the case for everyone, and excessive alcohol use over time causes atrophy of muscle mass. Translation: Your muscle mass decreases.

Believe it or not, alcohol is prioritized when burning off calories. As you body metabolizes alcohol, unlike regular macronutrients (carbohydrates, protein, and fat), your body cannot store them for later use, so those calories have to be used up right away. If you’re a heavy drinker or binge drinking, those calories can add up to 1/2 or 1/3 of your total intake for the day quickly. If you followed your macros, but didn’t account for the alcohol calories, you could be sabotaging your results.

Because your body can’t store alcohol calories and they must be used up first, your body cannot burn fat during this time period. Once those calories are burned off, your body can return to it’s normal processes of burning fat. There’s a lot of science behind this, but I want to break it down for the general population to understand. Alcohol is such a large part of our culture, no matter where you live, so it’s important to understand the risks and how it’s processed differently.

Your Muscle Mass can decrease with excessive use

For anyone looking to put on muscle, I would try to stay away from alcohol as much as possible, especially if you’re looking for GREAT results from your training. The occasional one or two won’t hurt you, but if you’re regularly drinking or bingeing on the weekends, stop that now and avoid muscle atrophy (reduction of muscle mass).

When our body metabolizes alcohol, about 25% of it is absorbed directly into our blood stream and the other 75% (ish) is absorbed by the small intestine. The alcohol spreads to the rest of the tissues and starts to break down. As alcohol is broken down, it turns into nasty things like acetate, Acetaldehyde–lysine adducts, and other toxic wastes. The adducts specifically, produced an immune response (as if we were ill) AND interacted negatively with amino acids in the body (the ones used to build muscles and perform other vital functions). So, not only are we slowing down our metabolism to burn fat, we’re also inhibiting building muscle mass through this chemical reaction that takes place in our body.

Acetate is even worse. This is the ingredient thought to cause hangovers because it’s known to directly induce headaches in rats. It also increases blood flow to the liver and depresses the nervous system (meaning that your nerves are slower to respond to a changing situation, like someone grabbing you). Acetate and it’s many forms are found in things like car paint, nail polish, and rubber adhesives.

These toxins and others are also thought to cause hypoxia in the liver, a decrease in oxygen levels. Decreased oxygen = decreased function. No oxygen = no gains.

Other effects alcohol has on your system

David Robson, in his article on Bodybuilding.com, outlines pretty well the other effects that alcohol has on your body and how the negative effect sabotages your health goals. I hit on most of them already, but one that I found interesting is that alcohol lowers testosterone levels, which are really critical in the recovery process for building muscle and for overall vitality.

Testosterone is an anabolic hormone, meaning it helps tell our bodies to make more muscle and to burn the fat that we’re using. Men and women have this hormone, women just have less of it. When we drink alcohol, the toxins reduce our test levels and ultimately, reduces our metabolic rate. That metabolic rate (as I talk about A LOT to my clients) is critical to our body’s function and using it to achieve our goals.

Even more profound was a Canadian study done that demonstrated a causation between alcohol consumption and increased food consumption. Alcohol increases appetite for salty and fatty foods, in addition to lowering our inhibitions, so we’re hungrier for the foods that are bad for us and because we don’t care, we’re more likely to steer away from our diets. Another study of 60 female undergraduate students demonstrated the same results, even with a placebo that made the control group believe they were consuming alcohol.

I could go on all day about how bad alcohol is for your body and your gains. I’m slowly decreasing my alcohol intake and making better choices when I am out drinking (i.e. only having one drink, eating before I go, drinking water before and after, etc). In reality, however, no alcohol is the only safe level in the body, and a lot more research is backing up this claim. I strongly advise my clients against drinking while they are on the gainz train because it seriously derails their progress and won’t budge the needle. Whatever your choice, make sure you’re safe and diligent.

But also, enjoy a margarita every once in awhile. Okay? 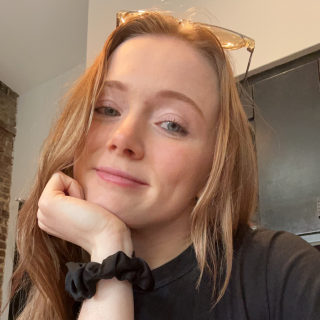 Quarantine day #5: I'm losing track of how many days I've been at my apartment, but at least I can enjoy my porch and get some work done (sorta) #covid_19 #pandemic #apocolypse #CB #Alaska #petsofinstagram #catsofinstagram #dogsofinstagram #workfromhome #furmama #relax #enjoy #nature #porchlife
Day #4 of quarantine: I bought the cat a harness and leash so she can sit on the porch with me. #covid_19 #catsofinstagram #frontporchsitting #sunnydays #harness #leash #petsofinstagram #corona #spring #pierone
Happy #internationalwomensday to everyone! . There are a lot of words that can describe me and other women, but each of our stories is unique and beautiful. I remind all of you, not just women, to step into your power, be vulnerable, and work on the dark parts of yourselves to come back to the person you know you are, but have hidden for a long time. #strength #women #empower #love #vulnerability #unique #beautiful #joy #celebrate #evolve #become #gamchanger #strongwomen #strongworld
Made it out for the first hike of the year on Thursday with the puppers. View was great, weather was on point, and NO TICKS THIS TIME. Here's to warmer weather and getting back out in the sunshine! #hiking #kingsgap #carlisle #PA #overlook #trails #nature #fun #doggo #fun #fitness #thursday #springiscoming
8 hours, 3 sessions, and a lot of ink later, we're FINALLY finished (other than a touchup) with this beauty. I gave @xlandonx a general idea and he ran with the rest. It turned out better than I envisioned and I'm in love with this tattoo. . If you get a chance, visit him @blackthorngallery You won't regret it! #tattoo #blackthorngallery #ink #mandala #flower #peony #quartersleeve #harrisburg #mechanicsburg #art #black #flex
Working for strong legs! Did a snatch EMOM and then worked on the accessory work (that's a 40# dumbbell) and the L-raises are helping to strengthen my hips and abs. . Tracking food and getting adequate sleep are key here, which happens to be where I'm lacking at the moment. . #crossfit #competition #prep #gobletsquats #raises #abs #legs #snatch #emom #accessorywork #festivus #work @vspink with the leggings @fnx_fit with the shirt #workout #oly #girlswholift #healthylifestyle #exercise #bebetter